hackschooling and the anatomy of entrepreneurial spirit

.
“Education is not preparation for life; education is life itself.”
John Dewey

I’m LOST dude!  Racing to remember … laughing all the way to the bank … ok, I’m behind on my payments but I have a contingency plan in place.
Ah, MAE 2016 – a reason to write again …

You can take this in any number of times and get something different each time.   All part of the plan … oh and you won’t be required – to memorize anything.

Get OUT of my way – I have somewhere I need to be and if I don’t get there – I’m doomed.  Flight 815, Oceanic – the red-eye departing at 7:48 pm from Sydney to LA, and I’m late.  Shit, I’m thirsty – no time for that.  Gotta piss – nope.  That precious presentation to the Board of Directors tomorrow morning.  They’re giving me 10 minutes.

It’s a spark, a fleeting moment when magic arrives. I remember as a child getting them quite frequently, here then gone – lost in the static/interference. When I started kindergarten it was a shock more than anything. A gentle transition would have been nice but no, thrown into the deep end. The rush to get there before the bell, the regimented timelines – work time, sleep time, snack time, then in grade 1, 2, 3 and so on … the assignments, homework – marks/grades and the all invasive “report card” garbage, measuring our progress; taking it home for my parents to look at – in fear of what’s coming, with that look on Dad’s face taking it in – the quiet holocaust ensues in expectation followed by the – “what’s up with this D in arithmetic? – go to your room – NOW!”.  I just wanted to eat my favourite supper (macaroni and cheese), watch Loonie Tunes and listen to music because I loved music. Sent to bed early, yet again – no ticky, no laundry – no supper, no Loonie Tunes – no music.  Ok, Mom (at least) wanted to feed me but nope – not a chance in hell!   What I figured out early on, is that it’s all about being rewarded for complying/producing and punishment if you don’t.

Sorry buddy, you lose – again.  Tough Love.  “This is how you learn”  he would say.  You will be judged by how you carry yourself – who you know and by how much money you make.  Ok, school provides hard lessons – so much need to know and all too little curiosity though – what’s up with that?  Dragging myself through elementary school, then high school (even worse).  Like algebra is torture because I don’t know what to DO with it!  Not a clue.  Chemistry class – memorizing the mechanics of the periodic table with no place to plug it in – renders it useless to me.  Ok, please give me a reason to learn this shit, because without anything to grab onto, I don’t see the point!  I want to have fun and do what I want to do – not what I’m supposed to do (what’s expected).  “Turn up the good and turn down the suck”!  (Deaner – FUBAR)

“Schools kill creativity, if you’re not allowed to be wrong, you’ll never come up with anything original.”
Sir Ken Robinson

The all encompassing question – over and over … “what do you want to do – who do you want to be when you grow up?” It was like they needed an answer NOW, but it was never answerable truthfully because I didn’t know. I was never asked “what do you want to be”- ah, that would have been easy … “I want  to be happy”. Well of course, a given, however because it was never asked, I was never able to answer that question, making it that much more difficult to realize happiness in the world.  Ignoring all the warning signs (part of our training).  Years later – “Doctor, I feel this pressure in my chest – I don’t get it – I’m still young – why is this happening to me?”  A prescription for the pain (pills) and the suggestion I come back in a weak week if (more like when) it keeps happening – band-aid on a brain tumor … right – (let’s keep this tab rolling shall we).  So what’s up Doc? – over and over.  Not WHO I want to be but WHAT I want to be – happy, simple.  I’m asking myself the question because no-one else will.

The spark is fleeting …

The script is embedded in our limbic. Go to school, get a job, get married – have kids – exist for a few years (seconds), then die before getting to that place where happiness lives. Disconnected in the redirect, needing to unplug, detach – go off the grid for a while to clear the voices in my head telling me I’m not doing it right.  Starting fresh? – let’s do this!  Every child has a love of something unique to them – desire can be nurtured if it’s recognized early on – only it rarely is.  Even as babies, we infants are naturally drawn to something that is intrinsically our own.  For me it was music. My Mom saw it and nurtured it; giving me a toy guitar when I was 4, seeing the light in my eyes when she invited some of her musician friends over to play at a party at our house (letting me stay up late) long before thinking about being a musician myself.  Dad is out of the picture – drinking with his buddies at the local bar (polished shoes, wearing a suit), making a big impression. 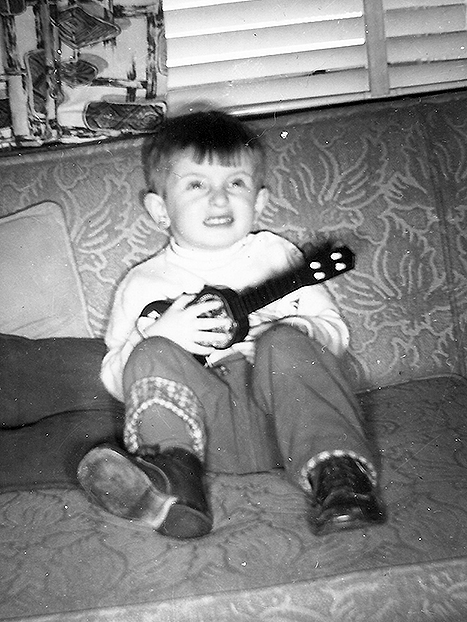 “Let yourself be silently drawn into the strange pull of what you really love.  It will not lead you astray”
Rumi

Listening to The Beatles and The Monkees on my record player then later on cassette tapes – a real guitar when I was 12 – crude and cheap but mine.  Always Mom.  My records were my life.  The idea of being a musician – far away.  When I was 9, she bought an old (out of tune) upright piano and had it brought into our house in Woodstock Ontario, just before she left him.  She was taught to play as a child by her aunt Allie who was a piano teacher but Mom didn’t play much anymore (ah responsibilities), wishing to pass her “idea” onto me. Dad killed that, coming home and seeing it in the dining room – the piano gone 3 days later.  Creative freedom wasn’t something he subscribed to; “no son of mine is going to be a musician” – and thus an idea I wasn’t allowed access to.  I often wonder what if … ?  What IF Dad had been on board too?

1967 is remembered as one of the most notable years in Canada.  It was the centenary of Canadian Confederation and celebrations were held throughout the nation. The most prominent event was Expo 67 in Montreal, the most successful World’s Fair ever held up to that time, and one of the first events to win international acclaim for the country but I was far away from all that in a small town in Essex County, near Windsor.  We lived in isolation on Lake St. Clair with Dad and Agnes.

In grade 6 at Centennial Central Public school, in Comber Ontario – a music teacher called us up to the front of the class individually to sing for her as she played piano.   She was feeling out talent for the senior choir and selecting the best.  I sang for her and her jaw dropped.  I’m thinking WTF is this?   Is this actually happening?  I was lead soprano in the choir for 3 years – the kid who steps forward and has a solo bit.  Finally WOW!  There IS a god.  By far the best part of grade school for me – happy.  We were bussed to county festival tournaments and we won first prize all three years.  Both of my parents in absentia.

This changed my life – so YES, school has it’s moments.  That being said / otherwise … 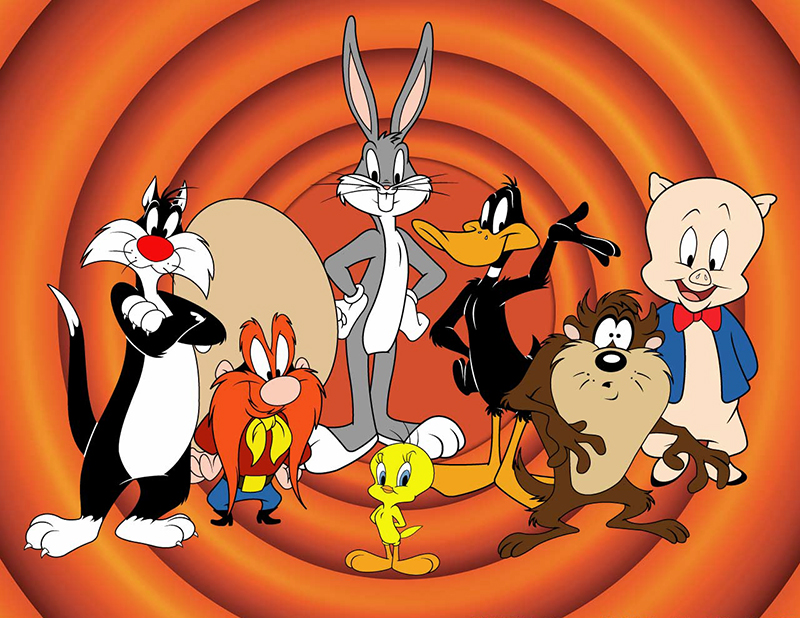 Grade school and especially high school is such a drain on young people – a copy/paste curricula entrenched in a coerced formula – a ‘dress for success’ kind of thing that means nothing fundamentally and in the grand scheme of things – but taking it on like it’s necessary because that’s just what you do.  Then after the dust storm subsides and the quiet cleanup commences; that once in a lifetime opportunity – that chance to be larger than life – but no hesitations or else it’s gone.  The slick websites with the long list of grads/alumni who have gone on to become huge successes – the “I’m a winner now” look on their smiling (choreographed) faces.  Marketing.

Fudged KPI’s and false promises permeate post-secondary in North America (esp. private schools), because it’s all about money.  Just when we think it might work.

My experience is that those who actually have what it takes, see through the crap and navigate around the seduction – rearranging the puzzle pieces in a way that doesn’t conform to tradition.  Experiences and interests emanating from a grounded vision, motivated in a challenge to the status quo – taking the risk (despite the odds).  Yes happy healthy creative – seeing new possibilities that lurk between the lines, thinking out of the box – seeing a bigger picture,  embracing freedom.

Yes, there are those who transcend the smokescreens, the chaos/obstacles and actualize their education.   Hackers are inventors/innovators who are frowned upon because they ignore the script. The world’s best scientists, artists, computer programmers, painters, philosophers and yes inventors are/were hacks.  No, not necessarily looking for the easiest way out but more like the quickest way IN … rearranging the fragments in a way that defies logic – power and peer pressure.

Quantum leaps occur in a spiritual connection to nature manifest in desire, curiosity – trusting instincts – veering off course – letting the kite fly – where it wants to fly.  Never forcing … only nurturing.  Being conscious – paying attention.   Learning to listen can be a personal project – a necessary step forward.
.

Did you know that most of the world’s greatest composers don’t know how to read music?  That many of the world’s literary scholars are terrible writers?  Formal schooling/traditional learning can work very well and all too often it burns the soufflé.  Way too much information and too little inspiration and all too late is what’s on the agenda – and you subscribe (like it or not).  Seeing a bigger picture in the storm is only the beginning and it requires an ability/willingness to tap into our passion, desire and love of life.  Some schools get it.  This website is dedicated to shining the light on those sources of inspiration – where benevolent support lives.  Some people care.

It’s what separates the leaders from the followers.  Being able to see what lurks beneath the surface.  Learning to trust/listen to what one’s instincts are whispering. 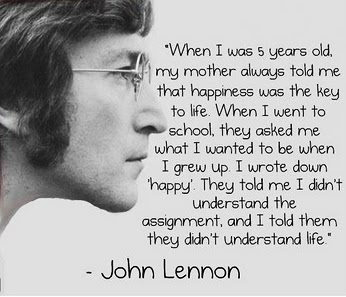 Mount it, then spin it … then watch it grow, believing in that feeling that started at the get-go.  People like Mark Zuckerberg, Steve Jobs, Angelina Jolie, Mother Teresa, Avril Lavigne and countless others did it, with little formal education.  Anything IS possible and  it’s only something that can happen if one can tap into the light that shone through them at the starting gate … the inception, assimilating everything we’re taught (that’s relevant);  beginning again.  That familiar clanging as the metal bars release and the crowd roars.  Maybe it’s more about stillness; watching all the other horses catapult into position – obsessed with winning.  All this running around.

Something’s trying to get out, and it’s never been closer.
Racing to remember …

“The only people who have proof of their sanity are those who have been discharged from mental institutions”
Marshall McLuhan, Take Today: The Executive as Dropout

Letters to the Editor in the Forum
http://www.jimlamarche.ca/forum/

The Learning Curve – An Observation in Modern Education (private vs. public post-secondary)
http://www.jimlamarche.ca/insight/the-learning-curve-an-observation-in-modern-education/