Food disorders run in my family.  My parents broke up when we were kids (younger brother), and we lived with Dad (near Windsor Ontario) and that sucked. Problem is that he didn’t feed us very well and we didn’t get the nourishment we needed (always hungry), so we over-compensated later on in life.  When we visited Mom (2 hours away in Woodstock) on that first week-end of the month from 1968 – 1973, we ate and ate and ate amazing food;  bacon/eggs, pancakes, swiss steak/roast beef, bbq chicken, mashed potatoes, pies/date squares and butter tarts for dessert and always awesome snacks (pop and chips, REAL milk and lots of sugar); like we needed to get it all in before the famine ahead and Mom poured the maple syrup on with lots of love.  It was 2 days a month of sheer bliss.  When we finally left Dad and moved in with her?

Ok, I think you get the point. 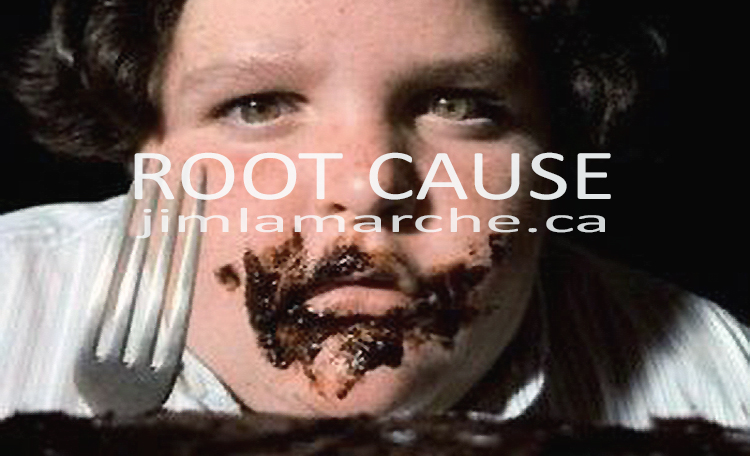 There is a phenomenon that goes unchecked in contemporary education that’s similar but hidden and is the root cause of a systemic bi-polarity.  It’s an adverse reaction to a lack of creative stimulation and intellectual nourishment in our early years; in rebellion to the unwavering compliance we are taught in grade school and continuing into high school.  It manifests in post-secondary in the form of ‘fun’ and appealing programs (almost recreational in nature) that are relatively stress free (well, at least on the surface) and are extremely profitable for those running things who have a quiet understanding of how to financially benefit from young people’s disenchantment.  I see this mostly in music/media arts & entertainment management but it’s scattered everywhere in a variety of college/university programs all over Canada and the U.S.

The biggest problem with education (in North America), is that it lacks vision and inspiration.  Kids are force fed crap that’s irrelevant to their individuality because it’s ‘healthy’ and conforms to the universal curricula measured in standardized testing designed to deliver results.  It’s all about learning to fit square pegs into round holes and eventually, integration into an employment culture where certain ‘rules’ are in place for a good reason.  It’s about learning not to question authority because if you do, there will be consequences, so just shut up, be on time and do your job.   By the time certain young people get to college, they are disenfranchised, alienated.   It’s time for a change – a ‘screw you’ release from the shackles and chains that have been binding us since we were young … freedom – FUN, in an all you can eat buffet that echoes hope in a promised land.  Work hard, play hard becomes play hard  first and foremost.  The downside of this destructive polarity is that kids (and even their parents) subscribe to a fantasy where few graduates actually end up finding meaningful employment in the field and are left with little to grab onto because it’s all so far fetched.

That said, there was/is a demographic that is more vulnerable than others.  I saw them consistently when I was a teacher at Trebas, IAOD/International Academy of Design, Fanshawe/Music Industry Arts and Metalworks Institute.  Many of my new students had an obvious chip on their shoulder and the more pissed off they were, the sooner they dropped out (because THIS is just more of the same bullshit), after failing their first test or missing an assignment.  A sense of ‘entitlement’ if you will.  Like they deserve to be larger than life, especially after that horrendous, messed up embarrassment of a child-hood (grade school/high school).  I was both sad and relieved (even happy) after they left because the longer they stayed, the more painful it became.  That said; there were those who survived and even thrived after graduating.  I’m thinking it’s those who came in and had a more balanced diet of reality and fantasy earlier on; eventually defaulting to reality and almost all integrating into non-music related vocations.  Almost like their childhood trauma was fixable (treatable) and they were more grounded and that doing this program was part of an expensive reality check (realignment).   This is what made teaching worth while for me.  There were even a few who actually became successful in media/music which made it even better.

We are all drawn to simple pleasures so when exposed to painful experiences for any length of time, we seek that familiar bliss again.  12 hours jack-hammering asphalt in the heat/sun, sweat soaked, sore and smelling bad has a tendency to return home to air conditioning and a dozen cold beers in front of the TV,  because it feels better.  There’s a balance in there but all too often, our mission is eclipsed by the weather/circumstances (stuff happens), and there’s nothing we can do but submit to what’s real.

My point is that we are all motivated by different things and those of us who are fortunate enough to be fed mindfully as kids, grow up with a more coherent understanding of the world and our place in it.  I would like those of you reading this, who are seriously considering a future career in media arts/music to ask yourself a fundamental question … Why am I doing this?   Is it because I want to give the world something, or is it because I want the world to give something to me?  The right answer is BOTH.  In my 30 years as a teacher (and in my experience) 9 times out of 10, it’s the latter and without a healthy balance of give and take, there’s nowhere to go.